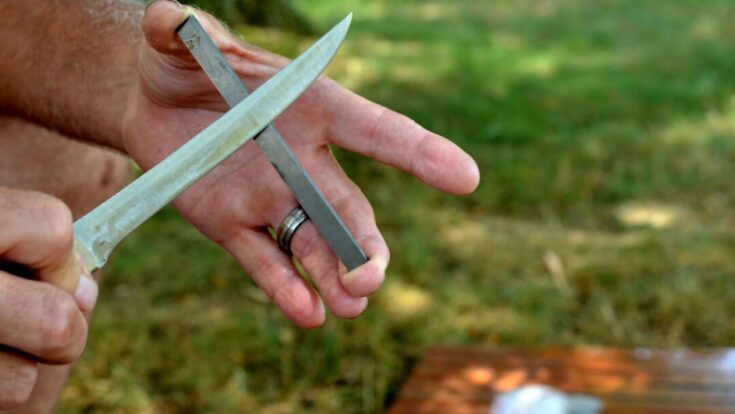 If you are someone who works with meat then you must know the fillet and boning knife. They are one of the most common types of knives and are used for cleaning down the meat from the bones.

But what is the difference between both of them? Well, this is the question asked by a lot of people and that is why I have prepared a complete guide about it.

This guide about boning knife vs fillet knife will give you a clear understanding of the difference between both of them.

The key difference between both the knife is the design and the length of the blade. Fillet knives are usually longer and thinner than a typically boning knife.

If you want to know more about the difference make sure that you have to read the complete article. So, this article is going to be very interesting and informative so, don’t skip any point.

What Is a Boning Knife? The boning knife is a specialized version of the hunting knife and the knife are most used for removing the meat from the carcass.

The blade of the boning knife is designed for cutting through the ligaments and the connective tissue of the raw meat from the bones.

A boning knife usually has a long, thin, and flexible blade and it can pierce the meat easily and safely. A regular knife will rip the meat from the bones rather than slice it.

If you are someone who cut meat regularly then a boning knife is highly recommended as it can do your job in a much better way.

What Is a Fillet Knife? Filleting knives are one of the most common types of tools for cutting down raw fish into thinner slices and removing the bones without damaging the fish.

Filleting knives are usually thinner and are more flexible than most knives. The blades of a fillet knife are longer and measure about 10 to 23 inches long.

There are many different sizes of one filleting knife and you can choose according to the size of the fish.

Since the filleting knives are mostly used for peeping at the fishes, it is often used in a wet environment. This means the blade needs to feature corrosion resistance for a smooth and easy cleaning.

Boning Knife vs Fillet Knife: Which One Is Best?

If you are someone who is looking for a knife to clean meat from the bones then you will require a good knife that can do your job.

But the question comes which knife should I go for? boning knife or a fillet knife and which one is more effective.

Well, every knife is made for a specific purpose, and you must know the purpose before getting yourself a knife.

So, these are the major difference between a boning knife and a hunting knife.

Both the boning knife and filleting knife comes in different length. Fillet knives are available in the size of 10 to 23 cm and it depends on the type of fish that you are filleting.

If you require a knife for filleting larger fishes such as salmon, the standard size of the blade will be around 20 cm for filleting an average size salmon.

However, the blade length of a boning knife is relatively shorter measuring about 12 to 17 cm and it features a very narrow blade so that it can easily cut through the meat.

2. Shape of The Blade

Both the fillet knife and boning knife feature a prominent curve, but when you look closely at the design of the blade you will find the key difference between them.

The fillet knife has a much more noticeable upward curve that is leading toward the curved tip. This is specially designed for steady cuts and for filleting fish in a much better way.

The boning knife is mostly straight all the way to the tip of the blade. The sharp tip allows you to easily pierce the meat and clean the meat from the bones.

3. Material of The Blade

Most filleting knives are made from stainless steel because the fillet knives come in contact with the wet environment.

However, boning knives are available in both stainless and high carbon steel, and you have the option to choose any one according to your requirements.

4. Weight of The Blade

When it comes to the weight of the boning knife then it mostly weighs from 140 to 285 grams.

However, the filleting knife is lighter as compared to a boning knife and weighs between 130 to 150 grams.

These are the main difference between the handle of the blade.

In most cases, the filleting knife has a much longer handle and has a better grip because of the longer handles.

Filleting knives are available in two different types including the electric model as well as the manual knives. Some of the filleting knives have folding handles for a compact storage option while traveling.

The electric filleting knife has a classic blade that has a saw life blade and the blade is being moved by an electric motor.

On the other hand, the manual fish filleting knife offers excellent precision cuts. It mostly relies on the strength of the arms and the hand direction.

If you are looking for the best filleting knife, then this is the list of the best ones:

What Are The Best Boning Knife

There are many different manufacturers that make boning. So if you are looking to buy a boning knife, these are some of the best boning knives that you can choose from.

What Is a Boning Knife Used For?

What Is a Fillet Knife Used For?

How To Clean a Boning & Fillet Knife?

Every time you are using your boning knife you must make sure that you immediately wash the blades so that blade doesn’t suffer from corrosion. These are some of the steps you can follow.

How To Sharpen a Boning Knife

All knives get dull after using them for a long time, especially when you are working to design and remove meat from the bones.

Well, when it comes to sharpening a boning knife, you can either sharpen It by going to a professional knife sharpener or your blades at home.

If you are considering sharpening your blade at home, then you must be familiarized with the sharpening process. Also, you must have a honing rod and a whetstone.

You can use a sharpening steel or a honing rod for removing the burrs. You would have seen chefs using a long rod and sliding the edge of their knife across the steel.

Now level the wheat stone if necessary. It’s important to level the Wheatstone so that you can get a perfect angle for sharpening the blade.

Now you can firmly down pressure the blade by sliding the blade along the sharpening stone. You will also have to drag the blade backward towards your body so that you can sharpen the blades properly.

So these are some of the major differences between a boning knife and a fillet knife, and I think you would have understood the difference between both of them.

Boning knives and filleting knives are quite similar and there are only a few differences between them. If you are new to knives sometimes it’s difficult to identify the difference.

Both the knife is good for cutting meat and you can choose any one according to your requirement.

These are some of the most commonly asked questions by people, and you can read this section to clear your doubts.

1. Can You Use a Boning Knife As a Fillet Knife?

The answer to this question totally depends on the type of blade you are using. If you are using a well-crafted boning knife then you can use it for filling fish. A thin and flexible boning knife can double as a fillet knife.

2. Is a Straight or Curved Boning Knife Better?

3. What Makes a Good Boning Knife?

A good boning knife is something through which you can easily perform the task. These are the few things that you have to consider.