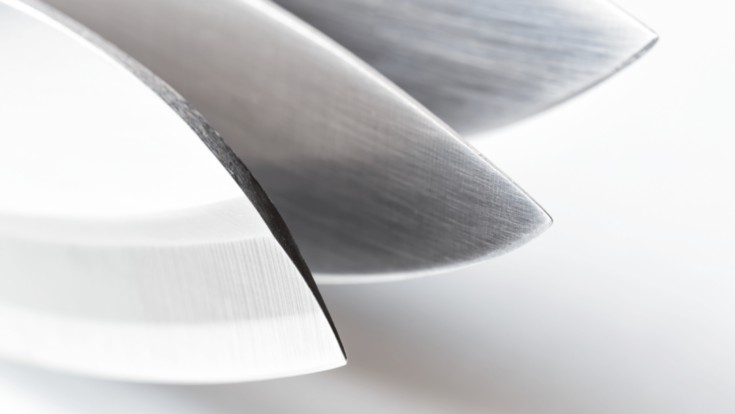 All types of knives are not created equally and if you are thinking of improving your culinary skills, then it’s very important to understand the difference between a single-bevel and a double-bevel knife.

The bevel on a knife blade is one of the most important aspects that can significantly affect the performance of the knife.

That way you have to read this complete guide so that you can understand both of them. As most of them are confused and ask me questions about it.

Therefore, I have decided to make a complete guide on single bevel vs double-bevel knives, so that you can get a proper comprehension of the distinction between the two of them.

So, this article is going to be very interesting, so don’t skip any points.

If you are new to kitchen knives then you can read the knife safety rules in the kitchen, as this will assist you with remaining protected while working in the kitchen.

What Is a Bevel Knife?

The knife bevel refers to the surface of the blade that has been grounded to form the edge of the knife blade.

This is called the “bevel” of the knife blade. If the knife has inclined on both sides of the blade then it’s called a “double bevel knife”.

While blades that are inclined only on one side is known as a single-bevel knife. There are mostly two different types of single bevel ie: single bevel right-handed and single bevel left-handed.

The bevel of the blade can easily be grounded to a variety of different angles. To make a sharp knife you will require a smaller angle. The smaller the angle of the blade the sharper the blade.

What Is a Single Bevel Knife?”

Single-bevel knives are also commonly known as “chisel edge blades” and are mostly adopted from the Japanese culture, especially the Japanese knife.

The blades are used in almost all kitchens and restaurants for cutting thin pieces of meat, vegetables, and cheese. The blades of a single bevel knife have one part of the edge grounded while the upper part of the blade is flat.

It has an angle of around 12 to 15 degrees and the blades are extremely sharp and can easily perform any kind of task in the kitchen.

Also, single bevel knives are perfect for people with advanced knife skills, especially for people that are skilled at knife-cutting techniques.

With the help of a single bevel knife, you can easily cut very thin slices of vegetables and meat as thin as paper as the blades are extremely sharp and you must make sure you know the knife safety rules before starting to use a single-bevel knife.

Since one side of the blade is grounded, the best part about the blade is they are available for both right and left-handed people and makes it possible for all types of people to use the knife.

What Is a Double Bevel Knife?

A double bevel knife is also commonly known as a “double edge bevel” and in a double bevel each side of the blade is grounded and this feature helps the blade to withstand cracking and rolling.

The blade has a sharp tip and a V-shaped tip, and its a more western look. The blades of double-bevel knives are extremely sharp and sometimes even sharper than a single-bevel knife.

The double bevel knife is mostly used for cutting fish to make sushi or peeling long vegetables. Generally, the blades can be used for a wide variety of purposes.

Also, the best part about the blades is you don’t have to practice any kind of special skills to control or use the double bevel knife. However, you must be careful while using a double bevel knife as they are extremely sharp.

Single Bevel vs Double Bevel Knife: What Is The Difference?

Usually, the angle of the bevel is determined by intending the purpose of the blade, as different angles offer different characteristics of the cutting edge.

You can look at the visual aspect below so that you can get a properly understand of the different types of bevels on a knife and how the blades actually look.

Single bevel knives are mostly used by professionals compared to double bevel blades. The blades are not as common in the average kitchen because the blades are intended for a specific task in the kitchen.

Most home kitchens would have a limited number of single bevel blades, as because the blades are made for a specific task.

Single bevel knives will always provide a much better cutting experience because the blades are relatively sharp.

Because the blades have a flat edge on the opposite side and this easily breaks the surface tension between the food and the blade. This allows the flat side of the blade to easily glide against the food in a much easier way.

Also when you are using a single bevel knife you will likely have to apply less effort to cut through the food, especially when you are cutting vegetables and raw meat.

Single bevel blades are important for most chefs and culinary professionals, as because the blades provide more precision work and when you are using a single bevel blade you don’t have to worry about using any other blades.

#How To Sharpen a Single Bevel Knife

A sharp knife is always a safe knife, and it’s important to keep your blades sharp all the time. The angle at which the single-bevel knife is grounded is very susceptible to getting dull.

There are a few different ways through which you can sharpen a single bevel knife.

Using an electric knife sharpener is a much better way, and you can easily sharpen your blades very cleanly.

# Durability Of a Single Bevel Knife

A blade with a single bevel is easy to sharpen, with a much lower angle, and makes the blade sharper and finer edge. However, a finner edge means the blade has a very thin edge.

Because of the thin edge, the blade of a single bevel knife easily gets chipped off and suffers from corrosion and you make sure that you are maintaining the blades by using knife oil and following the different ways to keep a knife from rusting.

# What Are The Best Single Bevel Knife

There are many different types of single bevel knives in the market and sometimes it’s very confusing finding the best one.

There are many different manufacturers that make single bevel blades but not all of them are good. Finding out the best one is tough. And I researched a lot and came up with the three best single bevel knives you can consider buying them.

Single bevel knives are very common and are widely used in most kitchens because of the increased influence of the Japanese knife types in western knife designs. So, here are some of the pros and cons of a single bevel knife.

Well, most Western-style kitchen knives are double bevel knives because the shape of the blades makes them ideal for cutting for other activities.

A double-beveled blade is sharp from both sides of the edges and when you are cutting the sharp edge of the blade is sliced through the food easily.

The only issue with a double bevel knife is when you are trying to cut soft food such as fish, meat, or even cheese the food gets stuck on one side of the knife making it difficult to cut straight.

A double bevel knife such as shun kanso is used for a variety of purposes. The blades can be used for a wide variety of tasks and can be extremely intricate work such as cutting the fish, making sushi, or cutting thin pieces of vegetables.

#How To Sharpen a Double Bevel Knife

The double-beveled knife has a very robust edge when compared with a single bevel knife because the edge of the blade has more steel.

However, not choosing a knife just because it’s tough to sharpen is not a good factor. If you have the right knife skill you can easily sharpen the blades.

Also, you can take your blades to a professional knife sharpener when you can easily sharpen the blades, and he might charge you $10 to $20 for sharpening the blades.

#Durability Of a Double Knife

Double bevel blades are more robust and strong than a single bevel knife due to the fact that it has more steel behind the cutting edge, also the blades are thick enough.

This gives an advantage to the blade, and there are fewer chances of the blade becoming rolled over when cutting through hard materials or when you are using a cutting board.

When you are using a double bevel knife you don’t have to worry about the blades being chipped off, like a single bevel knife.

#What Are The Best Double Bevel Knife

Most western people like using a double bevel blade and the blades are becoming more popular in recent days.

There are many different designs of double bevel kitchen knives, however, there are some common ones.

Single-bevel knives are mostly used by professionals with good knife skills whether you are in a domestic kitchen or a professional kitchen.

When you need precision, and a delicate cut is needed then you can go for a single bevel knife.

However, if your job is to fillet fish and cut sushi you can use a double bevel knife. The best thing about the blade is they are available in many different designs.

Once you are experienced with knife skills you will always want to have this knife in your kitchen and also you can look at the different types of kitchen knives for better understanding.

Lastly, before getting a single or double bevel knife you must make sure that you know your purpose, or else you might go wrong.

Most people are confused about single bevel and double bevel knives and that is why most people ask a lot of question-related. These are some of the most commonly asked questions, and you can read them to clear your doubts

2. What Is The Sharpest Knife Angle?

Most western knives are roughly around 20 degrees and the 20-degree angle is one of the best sharing points for most of the knives. However, most kitchen knife has a degree of around 17 to 20, which is suitable for cutting.