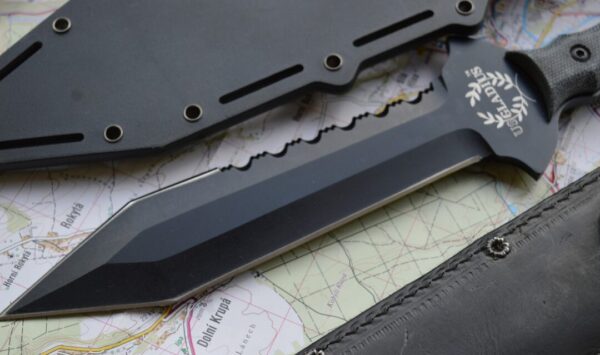 Hunting is not at all a simple job as it requires a lot of planning and hard work and backpacking for miles.

Well, you must have heard about Trophy hunting a game in which the head of the animal is kept as a display to represent the success of the hunt.

For making a clean trophy you need a special knife that can help you easily access different parts.

As there are many kinds of knives available in the market and most of them are not aware of what is the main difference between a caper knife and a skinning knife.

I have seen a lot of hunters mostly question what is a caper knife used for. Therefore, I answered all the questions, so I can provide an all-rounder solution in a common window.

Well, if you are someone who likes to hunt and preserve your hunt for years make sure you read this post till the end, so you can get a simple idea about the type of knife you should use.

After a successful hunting game, the most awaited moment is the meat and the trophy. Every hunter wants to celebrate after the hunt, and for a hunter, the best way of presenting a trophy is to prepare the hunted animal as a trophy.

Caping is usually the process in which the taxidermist prepares to present the hunted animals as a trophy by preserving the skull and neck.

This process will help you store all the different parts of the animals, but this process might take a lot of days.

Caping the head is the intermediate of a lot of hunters because the head is a major attraction that symbolizes a successful hunt.

What Is a Caper Knife?

To make sure you get the most respectable deer mount in the hunting games, it is absolutely important to have the best carp knife.

Well, meat is always important for every hunter, but skulls and bones are the most valuable memories that every hunter wants to keep with them.

Caper knives are mostly used by professionals to separate the meat from the skin of the head of the animal without even damaging the bones and the entire structure of the animal.

Usually, the caper knife has a different shape as compared to other types of knives.

The blade has a scalpel-like structure with a high degree of sharpness, so it can tear down the skin without damaging the bones.

What is a caper knife used for

Knives are one of the most important tools, no matter whether you are using them in a kitchen or for hunting.

As there are many types of knives made for different purposes, it is difficult to know which knife is made for what purpose.

In a similar way, taxidermists mostly used a caper knife to clean the head and neck of a deer, so they can display it as a trophy hunt.

Caper knives are usually made of high-carbon steel because of which they are extremely sharp compared to other types of knives.

A caper knife is used to give you detailed work, damaging no parts.

When caping the head and the neck of animals like the deer, duck, and turkey, the skin around the shoulders and head is slightly different as compared to other parts of the body.

It is difficult to remove the skin from parts like the eyes, and nose, and remove other sensitive parts. For this, you might have to break the bones to access those parts.

Therefore, a carp knife is one of the best tools that can help you clean all the parts that are even difficult to access.

A lot of hunters get confused about what is the major difference between a caping knife and a skinning knife, as we use both for cleaning the meat.

Well, the fundamental difference is the caping knife is used for cleaning the head and neck of an animal.

Caping knives are much smaller than compared to skinning knives, and they are also much slimmer and have a finer edge for cutting down the skin and neck.

On the other side, skinning knives are mostly used by hunters for separating the skin layers from the meat triggering no damage to the meat.

Choosing a skinning knife usually depends on the type of hunting that you are going to perform. There are mostly three types of skinning knives, they are:

How To Cape a Deer?

Before you’re caping a deer, make sure you get a high-quality cape knife and read this guide:

There are usually many types of hunting knives available on the market and not all of them are the same. Every hunting knife is made for a different purpose, as in the wild you don’t know what kind of animal you might face.

These are all the different knives used for different purposes. So make sure you know your work and choose a knife.

Camp knife is the most common type of knife, mostly used for outdoor activities like hunting and camping. They are small because of which they are easy to carry.

A Camp knife is a multipurpose knife mainly used for many things like cutting wood, preparing food, fire star, or splitting kindling. They are considered to be one of the best knives for hunting and fishing.

They are very common among hunters, as we mostly use them for separating the meat and cutting down the bones.

Furthermore, they are pretty strong enough because of the high carbon build. If you are someone who enjoys hunting deer, bucks, and big animals, you must have a boning knife with you.

The advantage of using a Bowie knife is the tip has a sharp edge on both sides that encourages you to cut from any direction.

They are also one of the best survival knives, mostly used for searching for food, making shelter, and absolutely protecting yourself.

The buck knife is manufactured in America for hunters. For those who are looking for a portable knife, the buck knife should be the first choice.

The best thing about buck knife, they are foldable and easily fit in the pocket.

Buck knives are becoming more famous in recent days and of which knife collectors started collecting them because they come in a lot of designs.

Skinning knives are mostly used for separating the skin from the meat layers. They usually have a very sharp tip and a curved body that helps to penetrate the skin easily.

The blade helps to quickly remove the skin in big hunting games. Although the knife is used for skinning but can also be used for hunting chores.

Final Thought On what is a caper knife used for

In conclusion, we can say caping an animal is quite a thought job, and you have to make sure you get one of the best caping knives because a normal hunting knife won’t work. It needs a lot of experience, so you make a proper cut.

Every knife is made for a particular task, so you get maximum performance. As we cannot use Deer butchering knives for another purpose.

The same goes for a caping knife. You can make the job by using a hunting knife but if you want a perfect wall, mount it is important to get a caper knife.

If you are thinking of caping a deer with a regular knife, then you are going the wrong way because a regular knife is not made especially for caping and does not have some extra features that a caper knife has.

I think I have answered almost all the questions related to what is a caper knife used for, and I hope the guide would have helped you out.

If you have questions, let us know in the comments down below.